In previous hikes of the Great rivers trail, I often walked along the river Linge. Today, it is the turn of a really big river: the Waal! I travel to Tiel and follow for a large part of the trail this mighty river, up to the town of Ochten.

From Tiel train station, I walk to the trail in about five minutes and turn right. I pass a number of stately buildings. I already like Tiel better than on the previous hike.

I follow the bend to the right and now walk through a park and along canals. In the canal, there is a large duck house. Even the ducks have a stately home.

At the edge of the park there is another beautiful house, and also a church. I turn into the little street between the church and the Makelaarshuys.

I go straight on over a small bridge and, of course, I have again overlooked the trail markings. After going straight on for a while, I finally realise that the markings have disappeared. I should have turned left before the bridge. I end up back on the trail via a detour and have now passed the St. Maartens church.

Then I walk through a butterfly garden called De Zindering, where several beautiful flowers grow. I don’t see many butterflies at the moment, though. So I quickly walk on in the direction of the city wall. From here, I can walk a bit on the wall with a view of the Waal river. I end up at a little square and on the other side of the road is the ferry to Wamel.

Unfortunately, the ferry has just left, so I have to wait about 20 minutes. With this view and the beautiful weather, it is not a punishment. It is quite a large ferry, but only for pedestrians and cyclists. The ferry has a ticket office. In the rush, I forget to say hello to the ferry operator when I buy a ticket. I make up for it by cheerfully saying goodbye when I leave the ferry. I am now on the Wamel side of the Waal.

Now on to Wamel. There is an alternative trail through the flood plains here, but I am wearing my low hiking shoes and it has recently been high tide, so I don’t know if the path is passable. I decide to go for the trail along the dike. First I go straight on for a while and then I turn left.

At this T-junction, there is an information panel about the near-flood disaster of the 1990s that also affected Wamel.

In 1995, things almost went wrong and Wamel narrowly escaped a flood disaster. After this near-disaster, the Delta Plan for Large Rivers was put into effect, with room for the river as an important component. The river dikes were raised and strengthened and the river is allowed to flow into the floodplains at high tide. Today, of course, work is still being done to keep the dikes strong. I will have to deal with this in an upcoming section of the Grear rivers trail.

This year’s floods (2021) hit the Maas river in particular, but you can see that the flood plains near the Waal are also flooded. The water has subsided, but there are still large puddles here and there in the flood plains.

Behind the dike are the most beautiful farms. At a junction with a path leading to the flood plain, I take a break on a picnic bench.

After my break, I walk into the town of Wamel. Here, too, there are beautiful houses, some of them large villas, and sometimes with a nice view to the flood plains. In the centre of the town, I see a striking façade with a golden lion on it. I also pass a small church.

At the little church I turn left and leave the town again. I now have a wider view over the flood plains and the fields, meadows and orchards behind the dike.

Like with many other rivers, wielen can be seen on both sides of the dike along the Waal. These are small lakes created by dike breakthroughs. The Buitenwiel is the biggest wiel I pass on this part of the trail.

I walk further along the Waalban dike and here it is easy to see that it was high tide, the flood plains are still largely under water. The birds make good use of it. I see spoonbills and storks, but also many coots, geese and ducks.

The Prins Willem-Alexander bridge comes into view; I have to cross it soon. At the foot of this bridge, I see a marking for a wooden shoes trail. The wooden shoes trail stays on this side of the Waal river, and I go to the other side.

Whenever I cross a bridge, big or small, I usually put my mobile phone (with which I take photos) in my bag for a while, to avoid accidents. I often drop things and this also happens to my phone sometimes, but usually not from a great height. It certainly wouldn’t survive a fall from a bridge. On the other side of the bridge, I get my mobile phone out again and take photos of the flood plain and the river. On this side of the Waal river, there are rows of white sandbags, also remnants of the recent high water. Or maybe they are always there as a precaution.

Wandering along the Waalban dike

After the exit of the bridge, I turn right onto the Waalban dike. I will follow this road for the next few kilometres. Here too, the original trail goes through the flood plain, but I don’t dare and choose the alternative trail on the dike at high water.

On my left, I see mainly orchards and polder land. On my right, of course, is the Waal and its flood plains. The most beautiful flowers grow in the verge and the place is buzzing with insects. A small blue butterfly flies by, which is called the common blue (of which I once made an illustration before). I even manage to photograph it. Its wing has suffered some damage. Small birds regularly fly up from the bushes with a tinkling sound. They are goldfinches!

European goldfinch
A European goldfinch is a striking sight with a red face and a white and black head. The wings are black with a yellow stripe. The tail is black and white also. The birds live in semi-open countryside, near farms and villages and in the suburbs of cities.

The goldfinch breeds from April to the beginning of August with two nests per year. The eggs are pale blue and white with purple-grey spots.

Then I reach the town of IJzendoorn with, behind the dike, a simple, small church with ditto cemetery. From the dike, I have another phenomenal view over the river. At the edge of the town, I take another break.

After a little further along the Waalban dike, I reach the town of Ochten. This is a good end point for today. I go and look for the nearest bus stop.

It was another Fine hike on the Great rivers trail with the Waal river as a literal centrepiece of the trail. I enjoyed the city of Tiel, the views over the river and the flood plains and the little towns behind the dike. The views do get a bit monotonous after a while.

Trail: Section 12 LAW 6 Great rivers trail
Where: from Tiel to Ochten, Gelderland, the Netherlands.
No. of km: +/- 13.5 km
Hiking date: 30 july 2021
Materials used in illustrations: Coloured pencils for the map and watercolour paints for other illustrations
Rating: ⭐⭐⭐
Trail booklet: 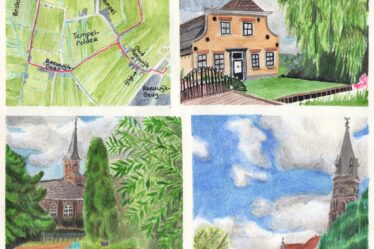 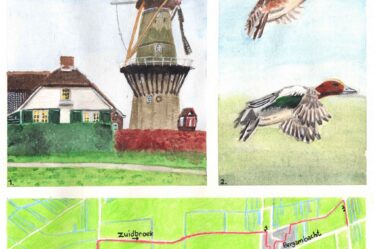 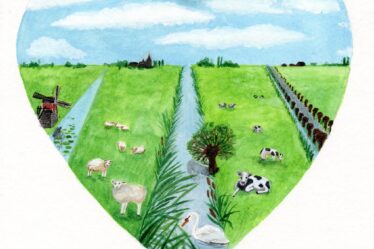