The Great rivers trail is calling me. I do another checkup to see if the blossoms are already starting to bloom. This time, I am hiking from Vianen to Leerdam and, on the way, I pass through the Bolgerijse grienden woodlands nature reserve and along a number of high-rise tree orchards.

To the starting point from Vianen

My starting point for the Great rivers trail today is at the Bolgerijense bridge. I get there from Vianen via the Panoven along the Merwedekanaal. It’s about a 2 km walk. In my previous hike I walked this road in the opposite direction.

On the other side of the bridge is the Autena pumping station. I take a quick photo and immediately go straight ahead along a farm road, the Bolgerijsekade. The sun is still low in the sky and shines beautifully between the branches of a tree. It promises to be a sunny day.

On my right-hand side is a patch of woodland and there seems to be a path around it, but I can’t see any markings. Should I have gone straight on before? I decide to walk back and go straight ahead according to the trail booklet. Almost at the end of the road, it turns out to be a dead end and I have to go back the same way. This way, I have walked an extra kilometre.

Later, I find out that there is a change in the trail. There used to be a footbridge over the A27 highway, but it is no longer there. Of course, this is not mentioned in the booklet. Note to self: just follow the markings or check the website of Wandelnet.

As I walk along the patch of woodland for the second time, I hear a strange sound coming from the bushes. It must be some kind of bird, but I can’t make out which one. It is a bit of a squawking and clucking sound, it sounds a bit like a turkey. I cannot see the bird anywhere, but I keep hearing it.

At the end of the road at a T-junction, I turn right and can pass under the A27 highway. From here I have two options: the normal trail to the right or the trail with a dog straight on. I don’t have a dog so I choose the trail to the right and that was an excellent choice! I walk through the nature reserve the Bolgerijse griend woodlands. I walk on a grassy path between reeds, bushes and willows. The path is a little muddy at times, but easily passable. Dogs are not allowed here, hence the alternative trail.

As I turn left, I see a large, fat pheasant fly up and, to my surprise, make that squawking, high-pitched sound I heard earlier. Oh, it’s a pheasant! Never knew they sounded like that. I turn right and walk between the willows, the trees have beautiful orange, yellow and ochre branches. That’s how beautiful nature is in early spring. In the distance, I hear the sound of pheasants more often. This is a paradise for these birds.

At an old bench, covered with moss, I take a break. Great tits and blue tits are flying around me. I love their company! I now have to turn left again over the Bolgerijse kade and then quickly right along the edge of the wood.

A little later, I walk among the willows again. On a branch, a small brown bird is sitting and singing a happy tune. I think I recognise a fitis. I have to turn left, but straight ahead is a bird watching screen. I am going to take a look. I peer through the holes in the screen and have a view of a pool, but of course there are few birds to be seen. So I take a break and I look up the sound of the fitis. Yes, it is indeed the same tune. Another bird that I can recognise!

The fitis
The appearance of the fitis is almost identical to the chiffchaff (see previous blog post for more info and an illustration of the chiffchaff). The fitis is also yellow-green-brown in colour. They are almost indistinguishable. The legs of a fitis are of a lighter colour though.

What distinguishes these two birds is their sound. As the Dutch bird protection organisation describes the song of the fitis: “clear descending song of sweet, melancholic sounds”. Well, indeed! The chiffchaff sounds simply like a chiffchaff: chiff-chiff-chiff-chiff (in no particular order).

The habitat of the birds is also different: the chiffchaff can be found almost everywhere, but the fitis prefers moist or dry semi-open landscapes, such as heathland, woods and agricultural areas. That’s right, that’s where I am now: moist semi-open landscape!

I return to the trail and walk along the edge of the woods with twisted trees. I walk on a sandy path where the roots of the trees stick out. So I have to watch my step carefully. Suddenly, out of the corner of my eye, I see something jumping away. It is three roe deer! They sprint quickly to the other side of the field.

I am at the end of the Bolgerijse griende woodlands. I turn right onto the asphalt. Not much later the paved path is over again. I have to turn left through a field. I see cows in the distance, but far enough away that they do not bother me. So I can go on at my own pace.

Above me, I see two greyish-blue birds flying around each other. I believe they are hen harriers, but I can’t be sure without binoculars.

On the other side of the field I reach the farm, but a metal fence closes off the field. I’m here on the right track, aren’t I? I climb over the fence. Once next to the farm, I see the trail markings again. I am in the right place after all. What a relief, it still feels a bit awkward to just walk across a farmyard.

At the front of the farm I turn left through the small town of Hei- en Boeicop with a long stretch of different farmhouses.

A few hundred metres further, I can turn right again. I really like this zigzagging trail so far. I follow a cycle path between the fields and a little further between high poplar trees. At the end of the cycle path, I turn left again. I have almost reached Schoonrewoerd. This is the least attractive part of the trail, I don’t find Schoonrewoerd very attractive. When I reach the town, I first go under a viaduct. I make a quick photo of the church and leave the town on the other side. I still have a long way to go to Leerdam, so don’t linger too much.

The fields made place for orchards. It is the beginning of April, but the blossoms are still not there. Spring is coming slowly this year. However, there is a magnolia tree in bloom!

A little further on I reach the Wiel van Bassa lake. This is a small lake created by a breach in the dike. Surrounding the wiel is an orchard of high-rise trees, recognisable by the taller fruit trees in various shapes and sizes. The trees are spread unevenly across the area, not neatly in a row as with the low-rise orchards. There is a ladder against some of the trees. The apples and pears are picked by hand, instead of by machines in the mass production orchards.

Wiel van Bassa lake
The Wiel van Bassa lake is the largest breakthrough lake in the Netherlands. The lake came into being because of a breach in the Diefdijk (which I will walk over shortly). The wiel is 13 hectares large and up to 8 metres deep. It is managed by the Zuid-Hollands Landschap foundation.

I read on an information panel that the trees are a good hiding place for little owls. Unfortunately, I do not see any. I walk in a semi-circle around the Wiel van Bassa and then reach the Diefdijk.

I walk along a number of bunkers on the Diefdijk. The Waterliniepad (long distance trail 17 – in the Netherlands) also runs here, but takes a slightly different path further along the Diefdijk. I go down the dike myself and walk along the Culemborgsche Vliet canal.

Across the canal, a goose is sitting on a nest and there are cute little lambs walking around. So you can see it truly is spring. On the way, I come across a small pull ferry and several unpaved paths, but these are not part of the trail. That is a pity, because I find this part along the canal a bit boring. You can follow a so-called wooden shoes path here that goes over the unpaved paths: the Rhenoijsche path. This one will be on my to-hike list.

I have had it with this hike at this point. The 20 km to Leerdam is a bit too far for me. The last drops are the heaviest. But I still have to go to the Leerdam train station. The road along the Culemborgsche Vliet and the Diefdijk converge in a point to the Wiel (another lake, just called ‘Wiel’ this time) and the Werk op de Spoordijk (a defence work of the Nieuwe Hollandse Waterlinie). I take my last break here. I notice a branch of blossom here actually. Still some blossoms close to the end of the hike!

On the outskirts of Leerdam, I pass through a park, but I cannot really enjoy it. I don’t feel like taking photos either. The last part through Leerdam I walk a little faster because I want to catch the train. It is a longer part than I expected, also because I have to make a detour due to a broken road. Fortunately, I can just make the train.

A surprisingly nice hike with the Bolgerijse Griendbossen nature reserve as its highlight. A bit too long of a hike for my liking. Don’t you think 21 km is too long? Then this is a super hike for you!

Trail: Section 8 and section 9 LAW 6 Great rivers trail
Where: from Vianen to Leerdam, Utrecht, the Netherlands.
No. of km: +/- 21 km
Hiking date: 2 April 2021
Materials used in illustrations: Coloured pencils for the map and watercolour paints for other illustrations
Rating: ⭐⭐⭐⭐
Trail booklet:

Would you like to do this super hike as well? Pin this hike on Pinterest to save for later! 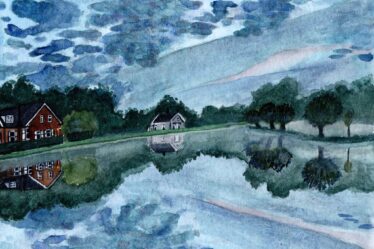 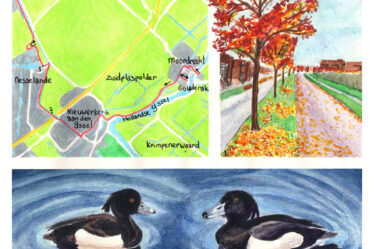 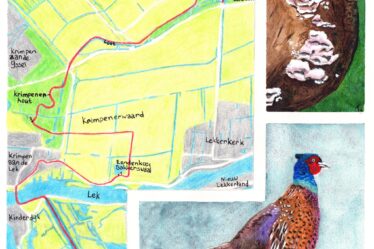