I am continuing my hike on the Great rivers trail. This time, the hike goes from Carnisselande, Barendrecht to Hendrik-Ido Ambacht in the Netherlands.

I’m starting in Carnisselande at the last stop of tram 25 coming from Rotterdam. It is a cloudy day in early October. The sun peeks through the clouds now and then. According to the weather app, it will remain dry for the most part today. At the end stop of the tram, I walk over a beautiful, wavy footbridge across the Gaatkensplas.

Further on, you can see the Gaatkensbult, an artificial hill from which you have a nice view of the surroundings. I have climbed up the hill before out of curiosity, and took two photos of the view.

For now, I take the hill for granted and continue on my way. I follow the cycle path through the Jan Gerritsepolder, a green but boring part of the recreational area Oude Maas. At one point, I cross the A29 highway where the Heidenoordtunnel starts.

On the other side, there are escalators for cyclists to pass through the Heidenoord Tunnel. My trail is not going through the tunnel, so I walk by. The next part of the recreational area is the Vredepolder, on the south side of Barendrecht.

There are many patches of forest and grassy fields here, with another view at the Oude Maas. I’ve had enough of this river by now. Just a little longer and I will leave the Oude Maas behind me for good 😃.

The Vredepolder seamlessly merges with the Spuiveld. I pass a pancake restaurant and a snack stand. I also see a brown and white building. At first, I think it is a public restroom, but surprisingly enough, there is a railway line running underneath. It’s a small train station of the Maasoever Railway Barendrecht. In the summer months, a small train runs here to entertain young and old. The station is now closed and I can continue my hike by following part of the railway tracks. Further on at the camping site, behind a large fence, the small train is parked.

After the camping site at a crossroads, I continue straight ahead along the cycle path. At the end of the path, I arrive at Heerjansdam.

The land of Oude Maas and Waal (another Dutch song title)

The Old Maas is finally behind me. Onwards to the next river, the Waal. This is not the big river in the middle of the Netherlands, which I will pass much later, but an old river branch between the Oude Maas and the Noord river. This river has been dammed up at Heerjansdam and Oostendam. The hiking trail also goes through these places, mostly along the Waal.

I have arrived at an industrial area, but I can’t see any markings of the trail. Once again, I have overlooked something. The map in the trail guide doesn’t make sense to me. The lamppost number in the description does not match the number either where I am now. So I have to use Google maps again. I walk a bit further over the industrial area. At the next road, I have to go back in the direction of the Oude Maas. I can’ t believe it! But when I come closer I see that I should have crossed over at the crossroads. I had gone too far. The markings are now showing again as well. I walk along a path between the trees and a little later I am in the Dorpsstraat of Heerjansdam.

In Heerjansdam, the trail then follows the Waalpad, of course, along the Waal. At a restaurant named after the river arm, ‘t Waaltje, the path ends. So far, the route is quite boring and I consider taking the branch trail to the train station of Barendrecht and go home.

Nevertheless, I decide to walk a little further, perhaps it will be nicer further on and I can catch a bus at Rijsoord. I walk through a railway tunnel with tile tableaus of all kinds of wildlife. The trail is so boring that I take a photo of each tableau 😂. I had more photos but I will not bother you with them.

After another short distance along the Waal, I arrive at the Waalbos. The trails goes once more in the direction of the Waal, but I see some signs for a redirection. I decide to be on the safe side and continue my hike through the Waal forest (Waalbos). The Waalbos is still a young forest, it was only planted in 2014. You can certainly see that. The trees still have to grow a lot. I am now walking through a wide landscape with ponds, reed beds and bushes.

Via the Waalbos, I walk towards the Waal and up the dike near the Rijsoord windmill. On the other side of the Waal, I can see beautiful houses by the water. I walk into the town of Rijsoord and start looking for a bus stop.

But unfortunately, when I arrive at the bus stop, I see that the local bus does not run because of the corona regulations. There is nothing else to do but go on to Hendrik-Ido Ambacht. In Rijsoord, I pass a church which I make a photograph of.

The road to Hendrik-Ido Ambacht is a very busy road, without a pavement. Several times, I have to step aside for cars speeding by. There are many large villas along the busy road. Eventually, I reach a quieter part of Hendrik-Ido Ambacht. By now, I have little interest in exploring this town any further. At the church square, I look up how best to get home by public transport. This is how: from the centre, by bus to Zwijndrecht and then by train to Rotterdam.

Apart from being able to incorporate nice song titles into my story, it was a boring part of the trail. Note the pictures of the tile tableaus and the lack of an extra info-block 😃.

The last part along the Oude Maas was not very interesting. The Waalbos between Heerjansdam and Rijsoord has yet to grow and the busy road in Hendrik-Ido Ambacht was downright unpleasant. If there is another possibility to reach Hendrik-Ido Ambacht, I would recommend it. A two star rating for the hike this time.

Trail: Section 4 and Section 5 Long distance trail 6 Great rivers trail
Where: from Carnisselande in Barendrecht to Hendrik-Ido Ambacht, Zuid-Holland, in the Netherlands.
No. of km: +/- 15 km
Hiking date: 2 October 2020
Materials used in illustrations: Coloured pencils for the map and watercolour paints for the other illustrations
Rating: ⭐⭐
Trail booklet: 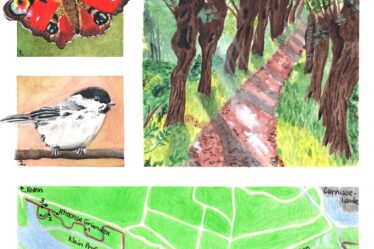 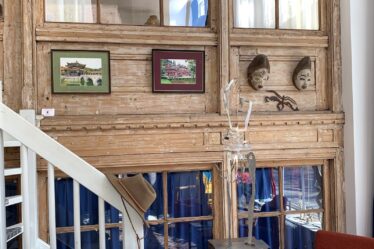 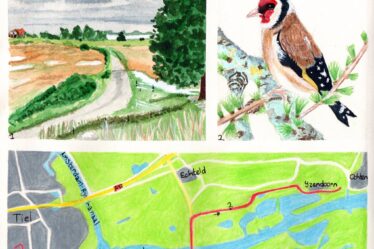