After a less pleasant hike last time, I am hopeful that this time it will be a beautiful hike again on the Great rivers trail. Today, I start at the bus stop just outside Ammerstol and walk along the Lek to Schoonhoven. I take an extra detour through the historic city centre of Schoonhoven and then take the ferry to the other side of the Lek river. Finally, I walk along the still intact city ramparts of Nieuwpoort.

The Lek river at Ammerstol

Just before sunrise, I am at the bus stop in Ammerstol. It is a few degrees below zero. I walk along a footpath in the direction of Ammerstol and the Lek. In the pond next to me, there are a couple of ducks with large crests on their heads. What a funny sight! Not much later, I climb a steep path to the dyke and look out over the Lek river.

What a view! The freezing cold has covered the landscape with a layer of frost. Everything has been given a pastel shade. I can see the colours in the floodplains of the Lek, the fields behind me and even the clouds and sky have a soft colour.

Of course, it is very cold, so at the next picnic spot, with a view over the Lek, I drink my first cup of coffee. But walking also makes you warm, so I quickly move on.

Silver city Schoonhoven
Schoonhoven has the nickname Silver city. In the 17th century, several silversmiths settled down by order of the castle lords who lived there. From there, a flourishing silver industry developed. Nowadays, many jewellers, studios and galleries can be found here. There is also a silver museum and the only silver trade school of the Netherlands is located in Schoonhoven.

Fortified city Schoonhoven
Schoonhoven is also known as a fortified city, part of the Old Dutch Waterline. Nine towns between Muiden and Woudrichem formed a line of defence across the polders. Pieces of land could be put under water to protect province Holland against enemy troops. Schoonhoven had a good strategic position because of its town walls and its location along the Lek. Only a small part of the old city wall along the Lek remains. The Veerpoort, cannons and the floodgate are also reminders of this part of history.

In the waterline short trail Schoonhoven on the website about the Old Dutch Waterline, you will discover everything about this fortified city. This trail is mainly the same as I have done.

Sources (in Dutch): In Schoonhoven and Geschiedenis van Zuid-Holland

With the silver city theme and the golden hour in mind, I made a matching illustration with silver and gold paint. I left the lines of the illustration black. By the way, I am not very happy about the illustration. I actually wanted to leave it out, but I had already put the corresponding number on the hiking map, so I added it anyway. I managed to get some depth into it with coloured pencils.

The Springer Park is located along the Grote Gracht, which is also a remainder of the former fortress. A group of sporty women are busy doing fitness exercises in the park, but otherwise it is still quiet.

I also want to take a closer look at the water tower. To do this, I walk along a path that circles the city centre in the star shape known from fortified cities. On the way, I come across a few more lovely canals and houses. Despite the fact that it is a tall tower, I have to search for it. But after a few little streets, I have found the water tower.

I’m going back to the Lekdijk via a staircase. I enter Schoonhoven the same way as earlier, but soon I can go up the ramparts to continue the trail. I walk past hotel Belvédère, and there is a coffee-to-go stand. It is open from 10 o’clock and lucky for me it is just passed 10 o’clock. I have already finished the coffee I brought, but another coffee would be nice on this cold morning. So I take a nice cappuccino and get a pack of kruidnootjes to go with it, because today is Saint Nicholas Eve. I sit down on a bench with a view of the river Lek to drink my coffee.

A little later, I continue over the town ramparts and I cross a small drawbridge. At the Veerpoort, the only city gate left in Schoonhoven, I walk towards the ferry. The ferry takes me to the other side of the Lek river. On this side is also the bus stop where I can catch the bus back home later. But first on to Nieuwpoort, my last destination for today.

In 20 minutes I walk along the Veersedijk to Nieuwpoort. The trail goes for three quarters along the city ramparts of Nieuwpoort and then turns south. I myself walk completely around the city. After all, I have to return to the bus stop later on.

Nieuwpoort
Nieuwpoort is one of the oldest fortified towns in the Netherlands, founded around 1270. In the 17th century, the current city ramparts, canals and bastions were built, as the city became part of the Old Dutch Waterline. The city lies diagonally opposite Schoonhoven on the other side of the Lek river. Because of its location on the river, the city had a good strategic position.

Under Nieuwpoort’s town hall, there is an inundation sluice connected to the Lek, to allow the land behind to be flooded via a canal. The sluice is located under the town hall, so that protesting farmers could not sabotage it.

Just before the city, I turn left onto the ramparts. With the sun shining on my face, I have another wonderful view of the Lek River and the picturesque houses and other buildings within the city ramparts.

Just outside the ramparts is a small harbour with yet another TOP (Tourist Transfer Point) in the form of a large, green blade of grass. From there are several walking and cycling routes to be followed.

I occasionally leave the city ramparts to take a photo of the sloping wall with two pillars (which are called monks) and of the town hall.

A little later, I have already completed the path around the city. Next time, my trail will continue from here. From Nieuwpoort itself, there is only a sporadic bus service, so I have no choice but to return via the same Veersedijk back to the bus stop. At the bus stop, I have plenty of time to eat my little pack of kruidnootjes.

The rating of the hikes on the Great rivers trail goes up and down. I notice that the weather has to be good to give a hike a 5 star rating.

Anyway, this time it was a perfect experience again: a wonderful hike! The frost in the morning gave me a beautiful view in pastel colours. I also liked the fact that gold (from the morning glow) and silver (Schoonhoven silver city) came together in this way. The little cities of Schoonhoven and Nieuwpoort are absolutely worth a visit. I couldn’t find any downsides. So, a five-star rating again!

Trail: Section 7 Long distance trail 6 Great rivers trail
Where: from Ammerstol to Nieuwpoort, Zuid-Holland, in the Netherlands.
No. of km: +/- 13 km
Hiking date: 5 December 2020
Materials used in illustrations: Coloured pencils for the map, black ink and watercolour paints for the other illustrations
Rating: ⭐⭐⭐⭐⭐
Trail booklet:

New titles for hikes
I have recently renamed the 5-star (and 4.5-star) hikes to Wonderful hikes. The 4, 3, 2 and 1-star hikes will also get their own title. In this way, I am collecting the best (and not so best) hikes together. I will be adding the hikes to these categories retrospectively in the near future, with matching photos for you to save on Pinterest. 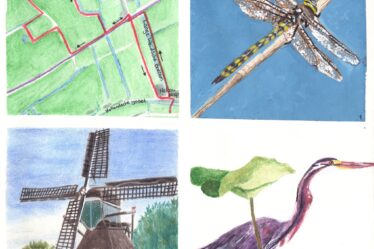 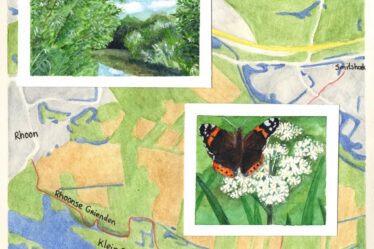 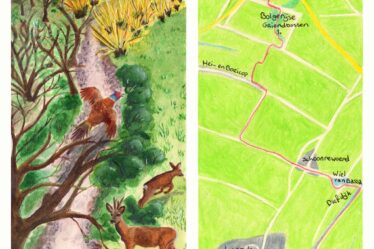