Today I have yet another plan: to photograph the windmills of Kinderdijk at sunrise. Hiking early in the morning when the sun is rising has been a great success since my hike from De Rijp to Wormerveer. Therefore I decided to walk the part of the Grote Rivierenpad between Hendrik-Ido Ambacht and Kinderdijk in the opposite direction. If the sunrise is disappointing at this time, I have another chance next time. To make the hike a little longer, I also added an extra round trip through the Crezéepolder near Ridderkerk.

I am early at the Kinderdijk visitor centre, the sun is not up yet. I grab my camera and head out when it gets a little lighter. A man walking his dog tells me that I can make good photos of the windmills further on, because the sun is rising from that direction.

I pass the first windmills with the first rays of light. There is a thick layer of clouds. I hope that the clouds will lift, but unfortunately, it does not get any better. I take plenty of pictures of the mills I come across. Each mill is carefully examined from every angle for nice angles, light and so on. I still have to practice a lot with my camera 😂.

The windmills of Kinderdijk are of course world-famous. The landmark of 19 mills has been on the UNESCO World Heritage List since 1997. The 19 mills consist of eight brick mills of the Nederwaard, eight reed-covered mills of the Overwaard, two reed-covered mills (the Hoge Molen and the Lage Molen) of polder Nieuw-Lekkerland and the windmill Blokweerse wipmolen. Together they ensured that the polders around the Alblas, Giessen and Nieuw-Lekkerland were kept dry.

In the distance, a large flock of starlings flies and makes beautiful shapes in the air. After half an hour (it is not very fast), I only passed the first series of windmills. Just before a small bridge, I am able to take a photo of the most famous spot in Kinderdijk: the windmills of the Overwaard, which are very photogenically arranged in a row.

After the small bridge, I walk in the direction of Alblasserdam. It remains cloudy with the exception of a little pink light. I walk past the next series of windmills. Despite the clouds, it is a really nice place to walk around.

The large group of starlings has chosen one of the mills for a break. The starlings sit next to each other on the sails of the mill, chattering cheerfully. What a nice sight! I wonder, will they choose the same mill every time or will they go to another one with the best view?

After an hour of taking photos of the windmills, it is time to continue the hike. I put my camera back in my backpack. At the edge of Alblasserdam, I leave the windmills behind me for the time being. Next time, I will have another chance to take sunrise photos.

I walk for a while through a residential area of Alblasserdam and soon I’m at the Randweg. On the other side of the road, I walk over a cycle path on the dike along the river Noord. On the other side of the Noord lies the Crezéepolder, through which I will later make an extra round trip. The cycle path winds along the water and on the left I pass the Rijzenwiel. A wiel is a lake or pond created by a breach in the dike.

In front of an apartment building with a view over the water, I take a break on a bench. Further on, you can see the bridge over the Noord that I will be crossing shortly.

A little later, I passed through Alblasserdam already and cross the bridge to the other side of the Noord. It’s been two hours so far and I’ve almost finished my hike. Another half an hour and I am back in Hendrik-Ido Ambacht. I find it too early to go home. I already checked beforehand whether there was somewhere else I could take an extra hike and my eye fell on the Crezéepolder.

Crezéepolder
The Crezéepolder is a freshwater tidal area south of Ridderkerk. Twice a day, this polder is flooded due to ebb and flow. In this area, you can see avocets, ospreys, reed buntings and beavers. Unfortunately, I did not see any of these animals.

The Crezéepolder hiking trail goes through this area, as well as through the Ridderkerkse Griend and De Gorzen. I have skipped the part through De Gorzen. This trail can be downloaded for free from the website of Stichting het Zuid-Hollands Landschap.

After I crossed the bridge, I still have to get to the other side of the road. I first cross a busy intersection and go under the highway via a small tunnel. I reach the Oostmolendijk and the Crezéepolder. What a peace and quiet all of a sudden! Although the highway can be heard constantly in the background.

First, I go along a marshy path on the left around the large lake in the middle of the polder. The marshy grass turns into a semi-paved path along the Noord. On the other side of the Noord, I see the bench where I took my break earlier.

When I am halfway through the lake, I see a nice small bridge further on. There is also a wood chip path that leads to a bird-watching screen. There is already a photographer at the screen, so I go on and leave the photographer and the birds alone.

After the small bridge, I turn right on a grass path along a swamp forest. A little later I can turn right through a kind of gate into the Ridderkerkse Griend, as the swamp forest is called. These grienden look very different from the Rhoonse and Carnisse Grienden where I have been before.

Would you like to know more about the Rhoonse and Carnisse Grienden? Then please read my previous blogs:

The Ridderkerkse Griend is much more swampy and of course it is full of willows. These have even more rugged shapes. There are many small streams in the area, which I can cross via boards, beams and bridges. In one of the streams, there is a tree trunk on which turkey tails grow (literal translation from Dutch: fairy banks). My first mushroom of the year! It looks like a great place for a fairy to be, overlooking the water 😃.

For this Crezéepolder hiking trail, I follow the posts and arrows of the hiking intersection network, but I lost another arrow. I am going the wrong way again. I end up walking a circle through the griend and end up at the same gate again. I should have taken a different exit. I walk back along the grassy path and further on I go round the lake to the left.

I first hike over the dike, but decide to go down the dike closer to the lake. I have to climb over a number of fences. I pass a row of trees in the middle of the lake. At the end of the row of trees, a number of cormorants sit on poles to dry their wings.

I have finished the round trip along the lake and go through the tunnel under the highway again and walk straight ahead into Oostendam. I follow the road that bends to the right, I see no markings and I have walked the wrong way again. Of course. With the help of Google maps, I go back in a circle to the point where I should have turned off. This is the second extra round trip today! This way, I will definitely make enough kilometres.

I am glad that I added an extra round trip to this hike. That made it a lot more fun. The windmills of Kinderdijk are beautiful and absolutely worth a visit. Tip: go early in the morning or at the end of the afternoon to avoid the tourists.

The last part through Oostendam and Hendrik-Ido Ambacht was a bit boring. With Crezéepolder round trip included, it is a four-star rating hike. With a beautiful sunrise, it would have been five stars, who knows what the next time will bring me.

Trail: Section 5 Long distance trail 6 Great rivers trail
Where: from Kinderdijk to Hendrik-Ido Ambacht, Zuid-Holland, in the Netherlands.
No. of km: +/- 16 km
Hiking date: 9 October 2020
Materials used in illustrations: Coloured pencils for the map and watercolour paints for the other illustrations
Rating: ⭐⭐⭐⭐
Trail booklet: 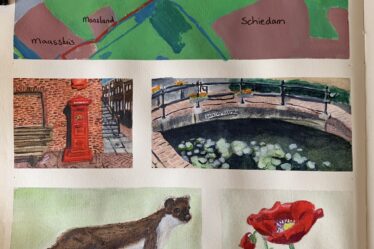 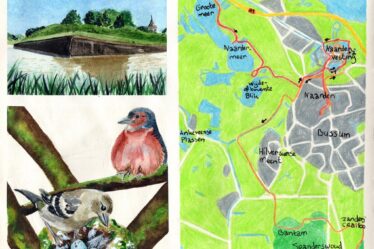 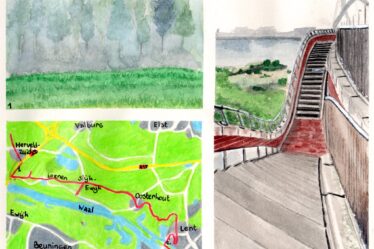