How nice it would be if you could capture your most beautiful holiday memories. Not tucked away in a photo book or on your computer, but in a prominent place in your home, allowing you to retrieve the memories every time you see it. This is possible with a personalised map of your holiday destination! Your memories, photos and places where you have been, captured in a painting.

Think for example of your first holiday with your loved one: the restaurant you ate at, the museum you visited or the streets you walked through. A unique, one-of-a-kind look back on a holiday you spent together. No one else in the world will have this work of art, because it consists of your photos, your memories, your holiday. You won’t find a more personal painting like this anywhere.

I made this map of Paris, for example, on behalf of a couple who wanted to have a nice memory of their weekend away.

Several photos taken by the couple themselves are depicted in an illustration with the map of Paris as background. On the sites where they have been there is a heart as an indication and the exact name of the location. The map is completely tailored to their wishes.

How did this idea come about?

The idea has slowly grown into a concrete concept. It started when I travelled to the United States. I wanted to capture the memories in a digital animation of a map with drawings, a kind of memorabilia of a fantastic holiday.

Many years later I started to record my hikes in a sketchbook (see also portfolio-item Sketchbook). I started with mini-illustrations in watercolour. At one point I incorporated the map with the hiking trail into the illustration and this gives a very nice addition.

My boyfriend also liked the idea and said “Why don’t you make it bigger?”. I’ve made the following map on A4 size and now it’s hanging on the wall in my studio as an example. Then we found acquaintances who wanted a map of their holiday in a larger size: the map of Paris in A2 size.

The map of Paris is the first assignment I have carried out on such a large scale. At A2 size, such a painting is at its best. But how do you go about it?

First of all, I collected information about the weekend trip. Where exactly have they been, how did they walk, which photos did they take and which are suitable for use? Which photos would they like to see for themselves? Are there any other special wishes?

With the collected information I was able to continue puzzling. I first digitally pasted the size of the map together in A2 template in Adobe Illustrator. Then printed the map in four parts and traced with tracing paper (4x A4 = A2). I taped the four parts of tracing paper together, coloured the back with graphite pencil, and then traced the map again on the watercolour paper. I now have got an A2 lightpad and transferring a drawing is much easier.

After the outline of the map, I made a layout for the location of the photos. Then I worked out the photos one by one: the photos of buildings in graphite pencil and the more colourful photos in watercolour. Each photo has been incorporated in detail in the illustration.

Fun fact: the watercolour paper is stretched on the glass tabletop in the living room. We tried several things, for example, on plywood or a wooden board as is recommended, but it didn’t work well. The paper didn’t stay put and it started to bulge. On the glass tabletop, the paper remains tightly stretched, but you have to be careful when removing it.

After finishing all the photo illustrations, I continued colouring the map with a light layer of watercolour paint. Finally I placed a heart indicator at all the places where the couple has been and added a title with the date of the weekend away. The map is framed with a light coloured passe-partout in a black frame of 50 x 60 cm.

Are you interested in a map of your amazing holiday, weekend break or city trip? Request a free quote via the contact form. 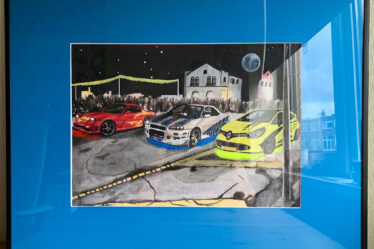 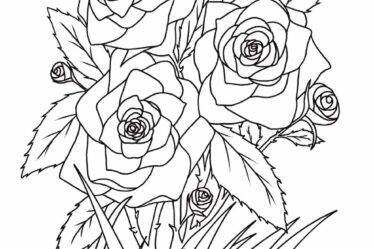 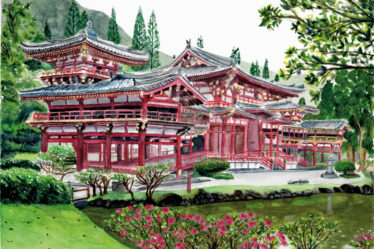